In the Media - scroll down to see Paul's media portfolio

For information on arranging interviews with Paul please contact :

-        Paul, 37, was born and raised in Calgary, AB. He now lives in Fernie, B.C., with his wife and two daughters.
-        He is the only Canadian participating in The 2007 Atlantic Rowing Race, and one of only two soloists. The remaining boats are competing in the pairs, fours and sixes categories.
-        Paul is an experienced endurance athlete. Some of his previous accomplishments include:
o        4th in solo category and 13th overall in the 2005 Yukon River Quest (it is 740 kilometres in length and is the longest kayak race in the world);
o        1st Canadian in the 2003 24 Hour World Solo Mountain Biking Championship; and
o        7th in 2003 Trans Rockies Mountain Bike Race (600 kilometre ride across the Rockies, dubbed "the hardest mountain bike race in North America" by Mountain Bike Magazine).

About The Atlantic Rowing Race (aka "the Iditarod on steroids):

-        The race, which started in San Sebastian, Canary Islands, Spain on December 2, 2007, is 4,727 kilometres (2,552 nautical miles), and ends in English Harbour, Antigua, West Indies.
-        Paul expects it will take him about 100 days to complete the race.
-        Paul is at sea without motor or sail in a 23.11-foot Woodvale Solo class row boat. He'll rely on his experience and countless hours of training to safely arrive on dry land in Antigua sometime in early March, 2008.
-        The race takes place every two years. In the 2005 race, competitors dealt with three tropical storms, the tail end of a hurricane, a shark attack, multiple capsizes and six dramatic rescues. Fewer people have successfully completed the race than have climbed Mount Everest.

-        Paul is racing to fulfill a long-standing personal dream, but to also raise awareness for the Canadian Museum for Human Rights (www.canadianmuseumforhumanrights.com)
-        The trip will cost approximately $200,000 and any funds above and beyond his trip expenses will be donated to the museum.
-        Scotiabank is proud to have joined Paul's crew of supporters, contributing $30,000 to help fund his adventure.  Scotiabank is also a proud supporter of the Canadian Museum for Human Rights.
-        You can keep track of Paul's journey and make a donation by visiting his website, www.solotheatlantic.com. 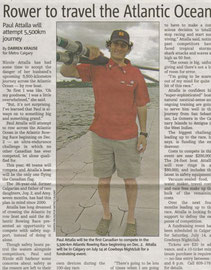